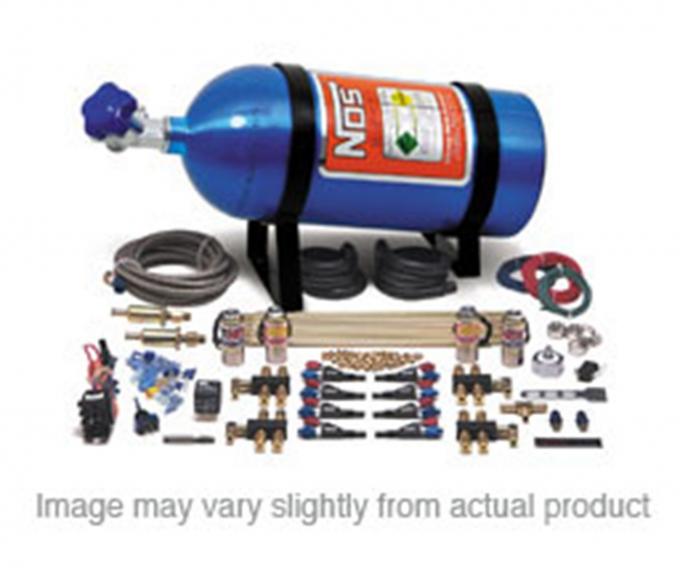 CALL US
844.323.8388
Description Downloads Video Specifications Reviews (0) Product Q&A
The NOS Sportsman Fogger Systems offer superior atomization and tuning by injecting precisely measured amounts of fuel and nitrous into each individual port with our patented Fogger Nozzles. Power levels are adjustable by changing nitrous and fuel Jets in each Fogger nozzle. The latest in high–tech solenoid technology allows for an extreme degree of reliability with jetting adjustability ranging from a 50 to a 150 extra HP gain. All Sportsman Fogger Systems include a 10 pound capacity nitrous bottle, Powershot nitrous and fuel solenoids, Fogger nozzles, aircraft quality steel braided hose, and all other necessary electrical and mounting hardware for a complete installation. Requires removal of intake manifold for plumbing.
Features:
Holley Performance Emission Code 4: This part is legal for sale or use on Racing Use Only Vehicles. The following vehicles are considered Racing Use Only Vehicles: Racing Use Only Vehicles are vehicles that are used exclusively for competition that are not registered and that may never be used on the street. WARNING: It is against the law to install this part on an Emissions Controlled Vehicle
Installation Notes:
To supply the carburetor and the Sportsman Fogger System in carbureted applications, use a fuel pump designed to operate between 5 and 10 psi with a flow rate of 0.1 gallons per hour per horsepower at 6 psi. Fuel injected applications will require a fuel pump that flows at least 0.1 gallons per hour at system pressure. For example at 42 psi flowing, a motor that makes 450 hp while the nitrous system is activated will require at least 45 g.p.h. at 42 psi flowing, and going down the track. Due to high power levels and cylinder pressures produced by Sportsman Fogger Systems it is highly recommended that you use high quality forged pistons and rods as well as high quality racing ignition system with timing control. If horsepower gain in more than 40% of original, forged pistons are recommended.

NOS Sportsman Fogger Nitrous System 05040-FINOS:
Reason for Inquiry:
* Your Name:
* Email (This will not be displayed)
Question:
Ask Question
www.motorcityvettes.com is owned and operated by Corvette Warehouse, LLC