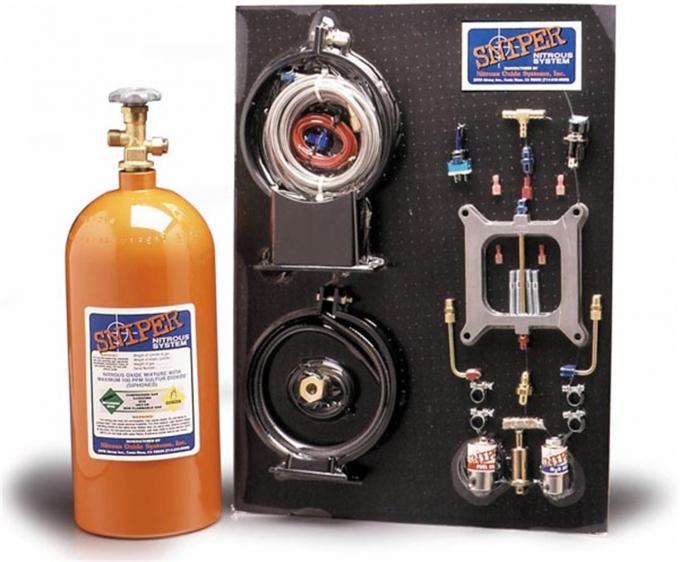 CALL US
844.323.8388
Description Downloads Specifications Reviews (0) Product Q&A
The engineers at NOS have hit a bullseye by designing the finest entry–level nitrous system available today with the NOS Sniper kit. The Sniper is the economical entry–level kit from NOS that simply blows away competitive kits. The Sniper was developed to introduce enthusiasts to the use of nitrous at a very affordable price. This system is a safe and reliable street and strip system that fits all popular 4 bbl. applications The Sniper is a fully adjustable system that is designed to provide from 100–150 extra horsepower in popular 4 bbl square bore or spread bore applications. However, you can get more than you bargained for. In dyno tests conducted by Chevy high performance magazine the Sniper setup produced an extra 163 horsepower when installed on a 355 CID small block Chevy with torque increased by an astounding 195 foot pounds. Sniper kits comes race ready right out of– the–box with all necessary components, including a distinctive bright orange 10 pound bottle with the industry standard industrial valve, adjustable plate with 100–150HP jets, solenoids, plus all required lines, hoses, fittings, clamps and a detailed instruction sheet to make installation simple.
Features:
Holley Performance Emission Code 4: This part is legal for sale or use on Racing Use Only Vehicles. The following vehicles are considered Racing Use Only Vehicles: Racing Use Only Vehicles are vehicles that are used exclusively for competition that are not registered and that may never be used on the street. WARNING: It is against the law to install this part on an Emissions Controlled Vehicle
Installation Notes:
To properly supply the carburetor and the Sniper System, use a fuel pump designed to operate between 4.5 and 7 psi with a flow rate of 0.1 gallons per horsepower at 6 psi. For example; an engine that produces 350 horsepower when the Sniper System is activated will require a fuel pump that flows at least 35 gallons per hour at 6 psi. *Actual performance gains may vary depending on the engine's configuration and condition.

NOS Sniper Nitrous System 07004NOS:
Reason for Inquiry:
* Your Name:
* Email (This will not be displayed)
Question:
Ask Question
www.motorcityvettes.com is owned and operated by Corvette Warehouse, LLC