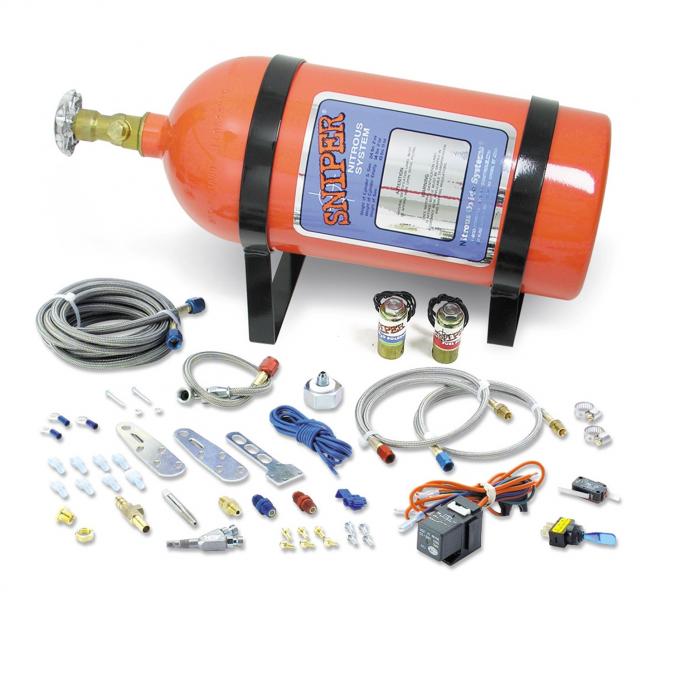 CALL US
844.323.8388
Description Downloads Specifications Reviews (0) Product Q&A
You've asked for it, now NOS has it NOS is pleased to announce its new 4 and 6 cylinder Universal Sniper Wet EFI nitrous kits. A great complement to NOS's cutting–edge nitrous kits, the Universal Sniper EFI kits are great for the budget minded builder that want the power nitrous is famous for. And, since it's made by NOS, the Sniper kits benefit from the experience of a proven Nitrous company that our customers demand. Each kit comes with all components necessary for a simple installation. Wet type kits are offered for most turbocharged and supercharged applications due to the increased air velocity and extra heat from the forced induction.
Features:
Holley Performance Emission Code 4: This part is legal for sale or use on Racing Use Only Vehicles. The following vehicles are considered Racing Use Only Vehicles: Racing Use Only Vehicles are vehicles that are used exclusively for competition that are not registered and that may never be used on the street. WARNING: It is against the law to install this part on an Emissions Controlled Vehicle
Installation Notes:
The EFI kits are designed for use with engines that are basically stock. A stock fuel pump should be adequate, however many pumps decline performance over the years and it is important to have a fuel pump that meets NEW specs. Use only premium grade pump gasoline (92+ octane) or unleaded racing fuel. In many instances, a high output ignition and free-flowing exhaust system may benefit performance. Do not use aftermarket chips or other devices that advance ignition timing, as detonation may occur.

NOS Sniper Multi-Fit Wet Nitrous Kit 07006NOS:
Reason for Inquiry:
* Your Name:
* Email (This will not be displayed)
Question:
Ask Question
www.motorcityvettes.com is owned and operated by Corvette Warehouse, LLC