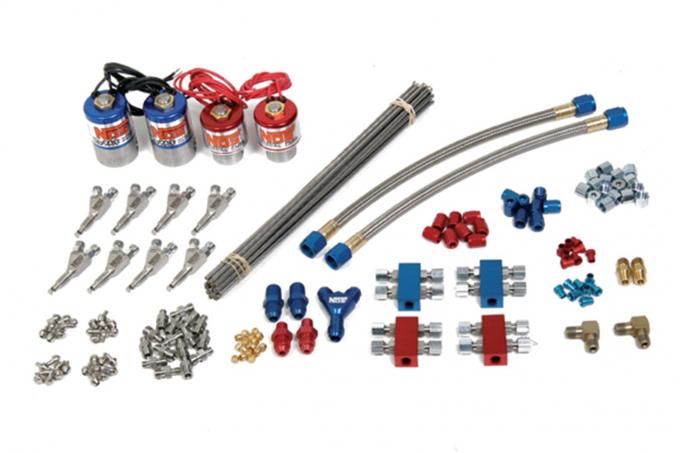 CALL US
844.323.8388
Description Downloads Video Specifications Reviews (0) Product Q&A
NOS has stepped it up with their new professional series Pro Shot Fogger kits. The new Pro Shot Fogger kits feature the newly redesigned super 'A' Fogger nozzle. Fashioned from the reliable original Fogger design, the Super A nozzle is made out of stainless steel instead of brass for durability and strength. The Professional Pro Shot Fogger kits also feature new distribution blocks and solenoids. The distribution blocks are made from billet aluminum and bright dip anodized in red and blue. They also feature 3/16 inch compression fittings that can be used with hard line or with poly line. The Pro Shot Fogger kits come with a new Pro Race nitrous solenoid that features a new proprietary plunger material that resists swelling, yet seals as good as a Viton type material. The nitrous solenoid also features a new blue powder coated housing where the cheater fuel solenoid features a red powder coated housing for easy identification and good looks. The new Pro Shot Fogger System has had many hours of R&D at the race track which equates to the latest in new track tested tune ups. The Pro Shot Fogger is for the professional nitrous user and is capable of providing an additional 500 HP. The Pro Shot Fogger comes with new improved solenoids, stainless steel hard lines, distribution blocks, jetting and hardware. Available separately, NOS offers electrical wiring kits and Bottle kits in a variety of combinations so you can make up your own custom kit combinations.
Features:
Holley Performance Emission Code 4: This part is legal for sale or use on Racing Use Only Vehicles. The following vehicles are considered Racing Use Only Vehicles: Racing Use Only Vehicles are vehicles that are used exclusively for competition that are not registered and that may never be used on the street. WARNING: It is against the law to install this part on an Emissions Controlled Vehicle
Installation Notes:
This kit does not include a bottle.