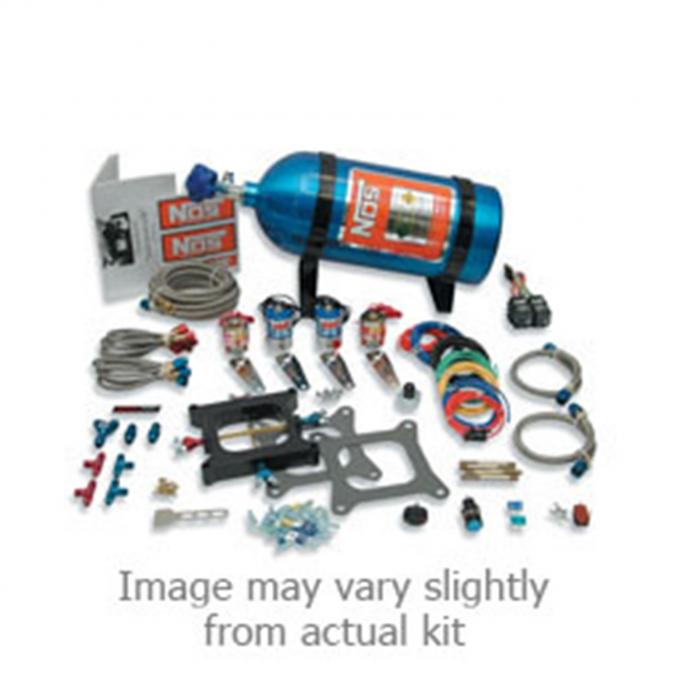 CALL US
844.323.8388
Description Downloads Video Specifications Reviews (0) Product Q&A
NOS is proud to now offer its powerful Pro Two-Stage wet nitrous system in black. This dual stage system gives you a moderate shot of nitrous at the line to get a solid start. Then, second stage of nitrous gives you serious muscle through mid-track and the top end. This system is adjustable from 200-500 horsepower and uses a special dual stage plate design for excellent nitrous flow, fuel atomization and mixture distribution. Our Big Shot style Pro Two-Stage plate utilizes four unique spray bars equipped with tiny orifices precisely located to efficiently dispense a powerful nitrous/gasoline mixture for unbelievable horsepower gains. Power output is adjustable from 200-500 horsepower simply by changing fuel and nitrous jets. This dual stage system includes everything needed including 6AN feed line, 1/2 inch fogging aluminum plate, black 10 lb. bottled, solenoids, hardware, and instructions to complete the installation.
Features:
Holley Performance Emission Code 4: This part is legal for sale or use on Racing Use Only Vehicles. The following vehicles are considered Racing Use Only Vehicles: Racing Use Only Vehicles are vehicles that are used exclusively for competition that are not registered and that may never be used on the street. WARNING: It is against the law to install this part on an Emissions Controlled Vehicle
Installation Notes:
To supply the proper amount of fuel to the carburetor and the Big Shot System, a fuel pump must be used that is designed to operate between 4.5 and 7 psi, with a flow rate of 0.1 gallons per horsepower at 6 psi. For example, an engine that produces 350 horsepower when the Big Shot System is activated will require a fuel pump that flows at least 35 gallons per hour at 6 psi.

NOS Pro Two-Stage Wet Nitrous System 02302NOS:
Reason for Inquiry:
* Your Name:
* Email (This will not be displayed)
Question:
Ask Question
www.motorcityvettes.com is owned and operated by Corvette Warehouse, LLC