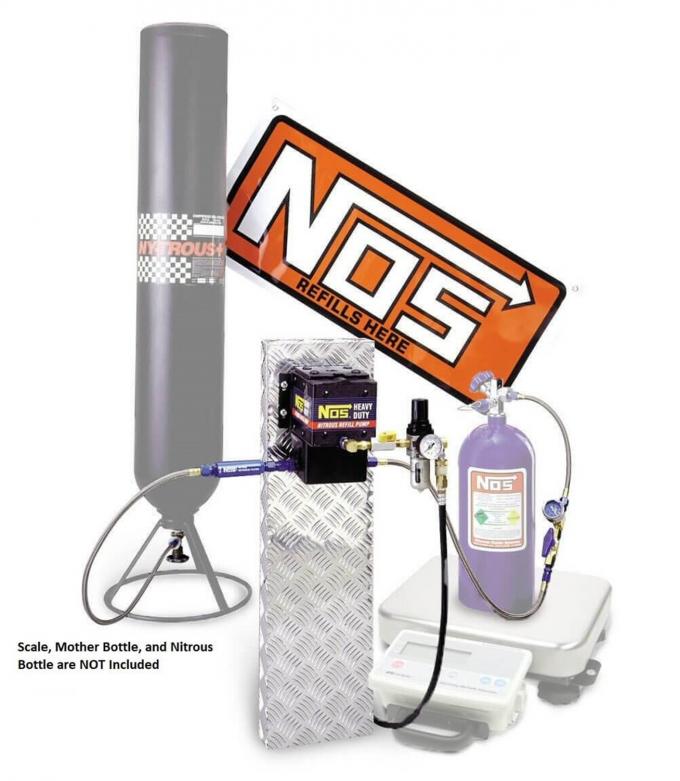 CALL US
844.323.8388
Description Downloads Video Specifications Reviews (0) Product Q&A
The NOS Refill Station is designed for performance retailers in the business of refilling nitrous bottles or racers who use a substantial amount of nitrous oxide. It's safe, easy, and quick; taking only a minute or two to accomplish. Gone are the days of freezing the receiving bottle overnight in order to get a full bottle the next day. The Refill Station comes complete with all the plumbing, hoses, gauge, valve, fittings, and bottle stand necessary to transfill nitrous from a mother cylinder to the receiving bottle instantly. NOS offers a water separator with built-in pressure regulator/filter recommended for use with our pump. The pump runs off your shop's compressed air and requires no electrical hook-up. NOS publishes a dealer network list of nitrous refill dealers throughout the U.S. and Canada.
Features:
Holley Performance Emission Code 4: This part is legal for sale or use on Racing Use Only Vehicles. The following vehicles are considered Racing Use Only Vehicles: Racing Use Only Vehicles are vehicles that are used exclusively for competition that are not registered and that may never be used on the street. WARNING: It is against the law to install this part on an Emissions Controlled Vehicle
Installation Notes:
*See NOS website for individual components*Refill Station will require three items not included in the kit:1. A compressed air supply (80-100 PSI @20CFM)2. Mother bottle (through local gas supplier)3. Scale (as bottles are filled by weight)WARNINGS:1. For maximum pump life, driving air supply should contain a water separator and be filtered to 10 micron.2. Loose connections will result in high pressure leaks and can cause serious injury or death due to displacing oxygen in room.3. Do no exceed 100 psi driving air pressure. Pressures in excess of 100 psi can cause equipment damage and serious injury or death in the event of an explosion. Do not use any compressor under 20 cfm. Scale, Mother Bottle, and Nitrous Bottle are NOT included.