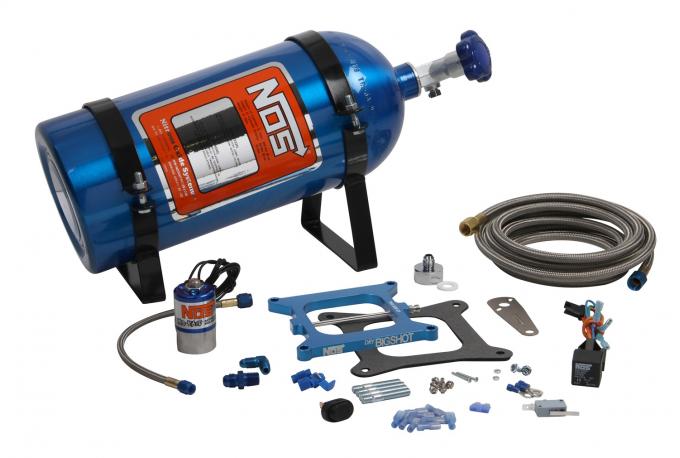 CALL US
844.323.8388
Description Downloads Specifications Reviews (0) Product Q&A
The NOS Dry BigShot kit is specifically designed to be used with an EFI system, such as the Holley HP or Dominator that can add the required fuel and adjust spark advance for a "Dry" type of nitrous system. The kit includes a billet 1/2" thick nitrous plate that mounts between a 4150 style flange throttle body and the intake manifold. A single stainless steel, 32 hole, spray bar delivers nitrous to the engine. The kit also includes a NOS Pro-Race Solenoid and jetting for power levels of 50, 75, 100, 125, 150 & 175 HP.
Features:
Holley Performance Emission Code 4: This part is legal for sale or use on Racing Use Only Vehicles. The following vehicles are considered Racing Use Only Vehicles: Racing Use Only Vehicles are vehicles that are used exclusively for competition that are not registered and that may never be used on the street. WARNING: It is against the law to install this part on an Emissions Controlled Vehicle
Installation Notes:
This kit is a "Dry" kit, meaning no additional fuel is added through the nitrous kit, as in a traditional nitrous/fuel system. This kit requires an EFI system that has the ability to add fuel when the system is activated.

NOS Big Shot Nitrous System 02155NOS:
Reason for Inquiry:
* Your Name:
* Email (This will not be displayed)
Question:
Ask Question
www.motorcityvettes.com is owned and operated by Corvette Warehouse, LLC