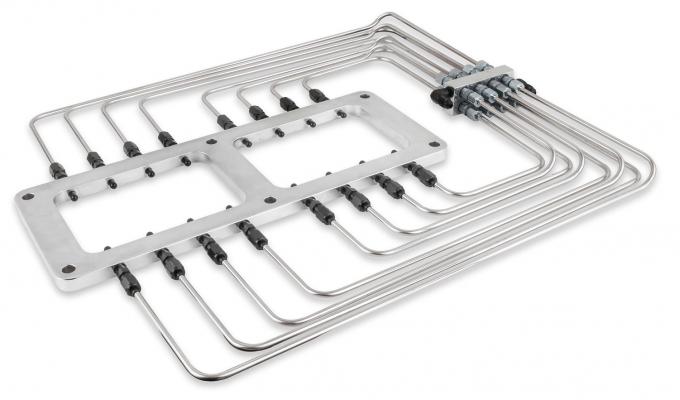 CALL US
844.323.8388
Description Downloads Video Specifications Reviews (0) Product Q&A
NOS offers supercharger injector plates and nitrous systems with black anodized polished aluminum plates, along with black nozzles, hardware, and bottles to give you a modern look to our popular 6-71/8-71 Supercharger nitrous lineup. Superchargers not only create more horsepower, but they also add unwanted engine heat. These NOS supercharger nitrous oxide systems can remedy that problem and increase power output at the same time. The nitrous is injected into the engine at -127 degrees F and mixes with the incoming air, reducing intake temperatures by up to 75 degrees F. The result is a denser intake charge and an increase in torque and horsepower of up to 30 to 40 percent over the entire power band! Plus, the nitrous can be injected at lower rpm--before the engine is at full boost--eliminating lag time and providing instantaneous power gains.
Features:
Holley Performance Emission Code 4: This part is legal for sale or use on Racing Use Only Vehicles. The following vehicles are considered Racing Use Only Vehicles: Racing Use Only Vehicles are vehicles that are used exclusively for competition that are not registered and that may never be used on the street. WARNING: It is against the law to install this part on an Emissions Controlled Vehicle
Installation Notes:
If performance greater than 200+ horsepower is desired, it is recommended that our roots-style supercharger plate system be upgraded with a Pro-Shot nitrous solenoid. This will increase maximum power capability to 325+ horsepower. Racing fuel, a racing ignition system with timing control, and internal engine modifications are required.

NOS Supercharger Injector Plate 13350-CBNOS:
Reason for Inquiry:
* Your Name:
* Email (This will not be displayed)
Question:
Ask Question
www.motorcityvettes.com is owned and operated by Corvette Warehouse, LLC