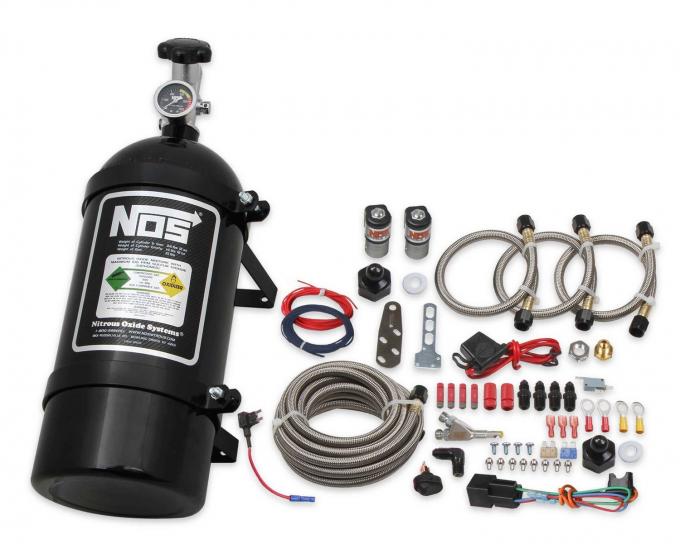 CALL US
844.323.8388
Description Vehicle Fitment Downloads Specifications Reviews (0) Product Q&A
NOS now has new Single Fogger EFI Nitrous Systems for GM, Ford, and Mopar. These new black systems give you the easiest way to add a wet nitrous system to your V6 or V8 powered vehicle. Each system utilizes a NOS Fogger Soft Plumb nozzle for smooth power delivery and easy jet changes. Our systems have everything needed including a 10 lb black bottle kit, NOS Powershot fuel and nitrous solenoids, microswitch, jetting for 50, 100, and 150 horsepower levels, along with hardware and instructions.
Features:
Holley Performance Emission Code 4: This part is legal for sale or use on Racing Use Only Vehicles. The following vehicles are considered Racing Use Only Vehicles: Racing Use Only Vehicles are vehicles that are used exclusively for competition that are not registered and that may never be used on the street. WARNING: It is against the law to install this part on an Emissions Controlled Vehicle

NOS Single Fogger Wet Nitrous System 06015BNOS:
Reason for Inquiry:
* Your Name:
* Email (This will not be displayed)
Question:
Ask Question
www.motorcityvettes.com is owned and operated by Corvette Warehouse, LLC