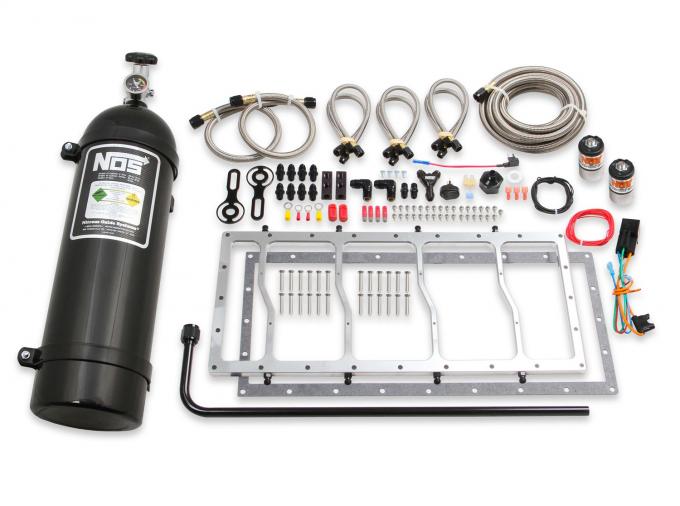 CALL US
844.323.8388
Description Downloads Specifications Reviews (0) Product Q&A
NOS sandwich-style plate systems are designed to bolt between the upper and lower intake sections on LS-equipped Sniper EFI Race Series Intake Manifolds. Our dry nitrous systems give you everything you need including 2 NOS Pro-Race nitrous solenoids, brackets, hoses, jetting, and hardware, along with your choice of nitrous bottle. At the center of this system is our machined billet 6061-T6 aluminum plate laser engraved with NOS logo, then anodized for great looks and excellent corrosion protection. Our 1-piece plate features machined passages that precisely spray into the center of each cylinder. Plate includes jetting for up to 250 horsepower but is capable of supporting 1000+ horsepower. The plate is made from billet aluminum with passages machined directly into the plate so there is no need to worry about spray bars breaking or spinning.
Features:
Holley Performance Emission Code 3: This part is legal for sale and use on Uncontrolled (Non-Emissions Controlled) Vehicles and Racing Use Only Vehicles. The following vehicles are considered Uncontrolled (Non-Emissions Controlled) Vehicles: 1965 and older U.S. manufactured California Certified vehicles/1967 and older U.S. manufactured Federally Certified vehicles/1967 and older Foreign manufactured vehicle. The following vehicles are considered Racing Use Only Vehicles: Racing Use Only Vehicles are vehicles that are used exclusively for competition and that are not registered and that may never be used on the street. WARNING: It is against the law to install this part on an Emissions Controlled Vehicle. The following vehicles are considered Emissions Controlled Vehicles: 1966 and newer U.S. manufactured California Certified vehicles/1968 and newer U.S. manufactured Federally Certified vehicles/1968 and newer Foreign manufactured vehicle

NOS Dry Nitrous Plate System 05504NOS:
Reason for Inquiry:
* Your Name:
* Email (This will not be displayed)
Question:
Ask Question
www.motorcityvettes.com is owned and operated by Corvette Warehouse, LLC